See the earliest surviving photograph produced in the camera obscura.

The invention of photography was announced simultaneously in France and England in 1839, dazzling the public and sending waves of excitement around the world. These astonishing breakthroughs depended upon centuries of developments in chemistry, optics, and the visual arts, accelerating in the decades after 1790. The Niépce Heliograph was made in 1827, during this period of fervent experimentation. It is the earliest photograph produced with the aid of the camera obscura known to survive today.

The photograph was made by Joseph Nicéphore Niépce (1765–1833), born to a prominent family at Chalon-sur-Saône in the Burgundy region of France. Motivated by the growing popular demand for affordable pictures, Niépce's photographic experiments were conducted with the dual aims of copying prints and recording scenes from real life in the camera. At his family estate in the nearby village of Saint-Loup-de-Varennes, he produced legible but fleeting camera pictures—or points de vue, as he called them—in 1816. Over the next decade he tried an array of chemicals, materials, and techniques to advance the process he ultimately called héliographie, or 'sun writing.'

To make the heliograph, Niépce dissolved light-sensitive bitumen in oil of lavender and applied a thin coating over a polished pewter plate. He inserted the plate into a camera obscura and positioned it near a window in his second-story workroom. After several days of exposure to sunlight, the plate yielded an impression of the courtyard, outbuildings, and trees outside. Writing about his process in December 1827, Niépce acknowledged that it required further improvements, but was nevertheless "the first uncertain step in a completely new direction."

In 1829 Niépce entered into formal partnership with Louis-Jacques-Mandé Daguerre (French, 1787–1851), proprietor of the famous Diorama in Paris. Daguerre continued to make vital improvements after Niepce's death and introduced his "Daguerreotype" process in 1839. After that stunning announcement, the Niépce Heliograph was brought forth by early supporters as evidence of his role in photography's invention.

The Niépce Heliograph passed through a chain of private hands in Britain in the nineteenth and twentieth centuries before it was purchased by the Harry Ransom Center in 1963 as part of the Gernsheim Collection. More than twenty of Niépce's heliographic plates and prints made between 1825 and 1829 are held in public and private collections, yet the Niépce Heliograph is the only known surviving point de vue. 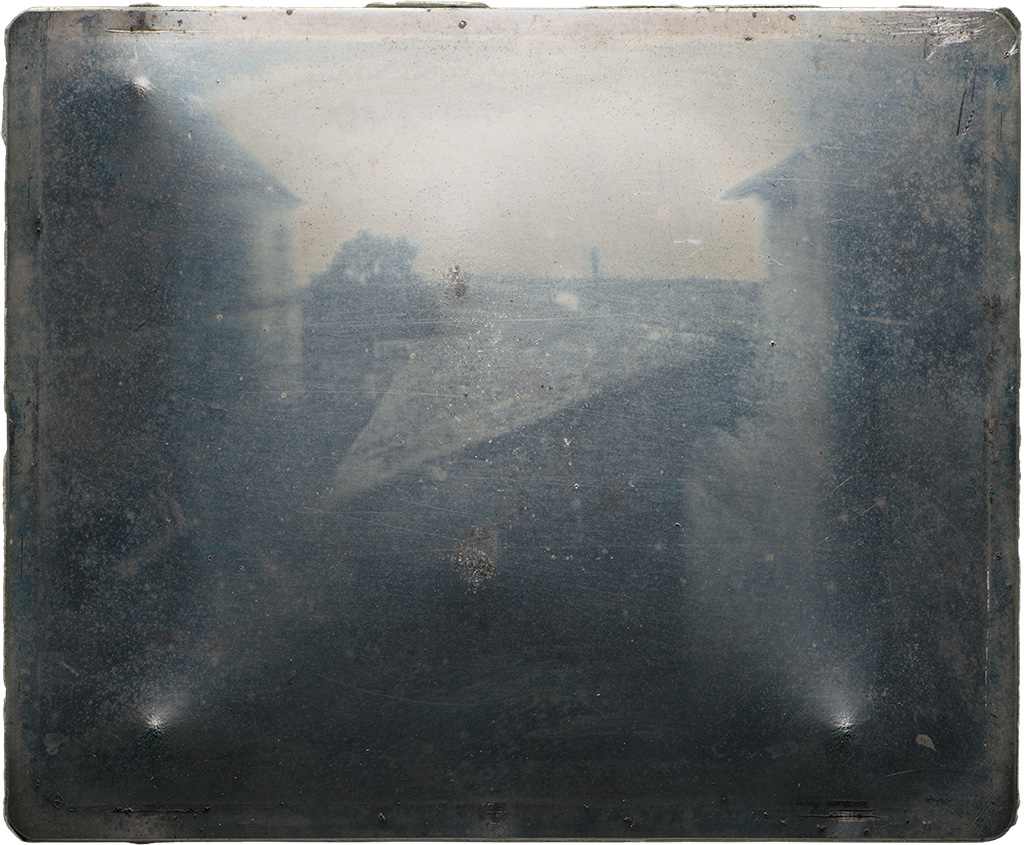